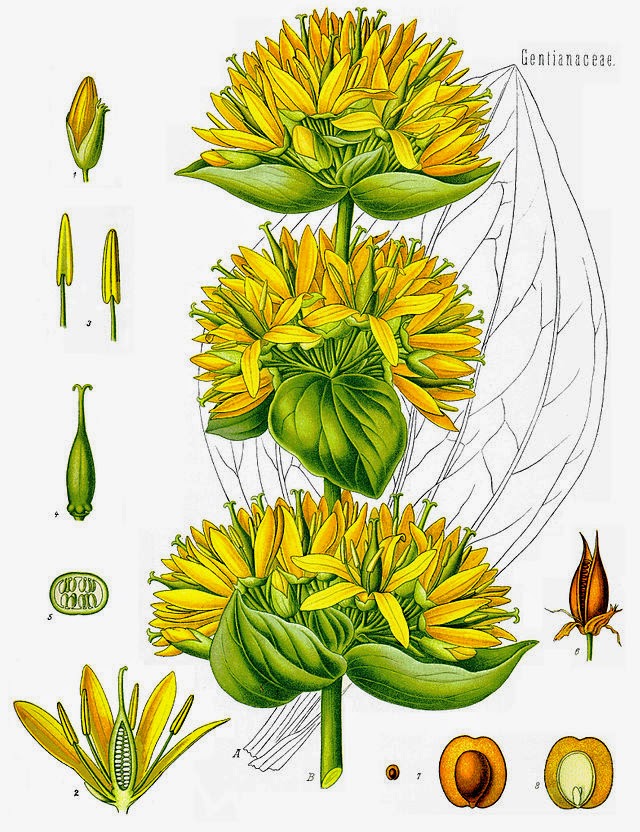 Gentiana lutea (great yellow gentian) is a species of gentian native to the mountains of central and southern Europe. Other names include 'yellow gentian', 'bitter root', 'bitterwort', 'centiyane', and 'genciana'

It is a herbaceous perennial plant, growing to 1–2 m tall, with broad lanceolate to elliptic leaves 10–30 cm long and 4–12 cm broad. The flowers are yellow, with the corolla separated nearly to the base into 5-7 narrow petals. It grows in grassy alpine and sub-alpine pastures, usually on calcareous soils.

It is remarkable for the intensely bitter properties residing in the root and every part of the herbage, hence they are valuable tonic medicines. The root is the principal vegetable bitter employed in medicine, though the roots of several other species are said to be equally efficacious. Before the introduction of hops, gentian, with many other bitter herbs, was used occasionally in brewing. It is a principal ingredient in Angostura bitters.[1]
The medicinal parts are the dried, underground parts of the plant and the fresh, above-ground parts. The name is a tribute to Gentius, an Illyrian king who was thought[2] to have found out that the herbs had tonic properties. It was used in the Middle Ages as an antidote to certain poisons.
Gentian root has a long history of use as a herbal bitter in the treatment of digestive disorders and is an ingredient of many proprietary medicines. The bitter principles of gentian root are secoiridoid glycosides amarogentin and gentiopicrin. The former is one of the most bitter natural compounds known[3] and is used as a scientific basis for measuring bitterness.
It was considered especially useful in states of exhaustion from chronic disease and in all cases of debility, weakness of the digestive system and lack of appetite. It was also considered one of the best fortifiers of the human system, stimulating the liver, gall bladder and digestive system, and was thought to be an excellent tonic to combine with a purgative in order to prevent its debilitating effects.
In veterinary pharmacopeia in the 1860s gentian root or gentian radix was considered useful as a tonic and stomachic [4]

Posted by www.AlbDreams.net at 8:30 AM